Last week a trailer was released for the upcoming film ‘The Grace Card’. It seems to be a ‘Christian’ film, but many things about it leave me far from convinced that it will accurately portray the Christian gospel. The worst of all was a line in the trailer which sounded like a pivotal moment in the film. 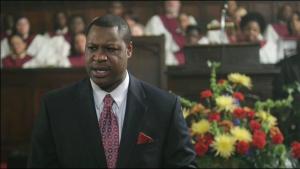 What a horrible false dichotomy is introduced here! Are justice and grace mutually exclusive? This seems to be the suggestion of the film. I don’t want to be too harsh, given I’ve merely seen a trailer rather than the full film, but it strikes me that this quote undermines all that is good about the God of the Bible.

God doesn’t abandon justice in favour of grace. This would be a cheap form of grace, which would reveal an arbitrary and unjust god. This is not the God of the Bible. This is not the Christian God. Quite the opposite.

God does extend grace through Jesus’ death, but not at the expense of justice. If there was no need for justice, why would Jesus have died? Why not simply forgive everyone all their sins? That would show grace; but what a terrible, grotesque, unjust grace it would be! This is not the grace referred to in Ephesians 2:8, quoted in the NIV at the end of the film trailer.

For it is by grace you have been saved.

The grace by which Christians have been saved is a grace which includes justice. Romans 3:26 speaks of God not only as the justifier (by grace) of the one with faith in Jesus, but also the one who is just. The reason for Jesus’ death was to provide a means of grace which did not contravene God’s perfect justice.

It is indeed grace we need, but we also receive justice from God. Praise the Lord!

For the last week or so I’ve been reading The Discipline of Grace by Jerry Bridges, which forms part of my preparation for Relay. I think it’s about the 20th book I’ve read so far this year, and with the possible exception of The Cross of Christ it is the best of them all. I highly recommend it to any Christian who hasn’t already read it, something I’d say about very few books. In it I came across a nice rhyme which, although I had heard before, I’d forgotten:

Run, John, run, the law commands
But gives us neither feet nor hands.
Far better news the gospel brings:
It bids us fly and gives us wings.